A spectacular exploration of varied paths of devotion that converge at one of the world’s most extraordinary religious events — the Kumbh Mela — Pan Nalin’s thoughtful documentary is a genuinely spiritual journey.

In the Hindu tradition, gods and goddesses dance as a way of expressing the dynamic energy of life. The image of Nataraja represents the god of gods, Shiva, as the Lord of the Dance, choreographing the eternal dance of the universe as well as more earthly forms such as Indian classical dance (which is said to have originated from his teachings). In Hindu mythology Shiva is also Yogiraj, the consummate yogi, who is said to have created more than 840,000 asanas, among them the hatha yoga poses we do today. While a cultural outsider may not relate to these mythic dimensions in a literal way, dancers in India revere the divine origins of their dances, which were revealed to the sage Bharata and transcribed by him into the classic text on dance drama, the Natya Shastra (circa 200 c.e.). What many practitioners of yoga do not know is that one of the central texts of yoga, Patanjali’s Yoga Sutra, written around the same time, was also inspired by an encounter with Nataraja.

Srivatsa Ramaswami, Chennai-based yoga teacher, scholar, and longtime student of yoga master T. Krishnamacharya, includes a pivotal story of how Patanjali came to write the Yoga Sutra in his book Yoga for the Three Stages of Life. In Ramaswami’s account, Patanjali, a young man with a great yogic destiny, is drawn to leave home to do tapas (intensive meditation) and receive the darshana of Shiva’s dance. Eventually Shiva becomes so taken by Patanjali’s ekagrya (one-pointed focus) that he appears before Patanjali and promises to reveal his dance to the young yogi at Chidambaram, a Nataraja temple in present-day Tamil Nadu. At Chidambaram, Patanjali encounters a golden theater filled with many divine beings and sages. To Patanjali’s wonderment, Brahma, Indra, and Saraswati start to play their sacred instruments. Shiva then begins his ananda tandava (“dance of ultimate bliss”). As Ramaswami tells it, “The great tandava starts with a slow rhythm and in time reaches its crescendo. Engrossed completely in the divine dance, the great sages lose their separate identities and merge with the great oneness created by the tandava.” At the end of the dance, Shiva asks Patanjali to write the Mahabhasya, his commentaries on Sanskrit grammar, as well as the Yoga Sutra, the yogic text most widely used by Western yoga practitioners today.

Another area where dance and hatha yoga meet is in the actual sadhana (practice), where there are many parallels between the two arts in both the technique and spirit (bhava) of the dance. The tradition is passed from guru to shishya (student) in a live transmission; the teacher gives the proper adjustments and guides the students into the inner arts of the practice. All of Indian classical dance refers back to the Natya Shastra text for an elaborate classification of the form. If you thought the technique of asana was detailed, you should peruse the Natya Shastra: It not only describes all the movements of the major limbs (angas)—the head, chest, sides, hips, hands, and feet—but also offers a detailed description of the actions of the minor limbs (upangas)—including intricate movements of the eyebrows, eyeballs, eyelids, chin, and even the nose—to create specific moods and effects. As in hatha yoga, one begins with the basics of body mechanics and gradually moves toward the subtler aspects of the art.

The karanas, dance counterparts of asanas, are linked into a sequence known as angaharas. Ramaa Bharadvaj compares angaharas to the flowing yoga of vinyasa, in which the “dance” of yoga is experienced as the linking of one asana to the next through the breath. “Even though a posture can be held,” she says, “it is really part of a flow. It’s like the Ganges coming down from the Himalayas: Although it passes Rishikesh and then Varanasi, it doesn’t stop; it keeps flowing.” Like the alignment of asanas, the karanas are based on the center line of the body in relation to gravity and include not only placement of the body but also attention to the pathways of energies that flow through the body.

Ultimately, yoga is about connecting to the Big Dance, which one can experience either abstractly, through the lens of spiritual culture, or more intimately, as did physicist Fritjof Capra. In his book The Tao of Physics, he describes the experience he had while he was sitting on the beach and watching the waves, observing the interdependent choreography of life: “I ‘saw’ cascades of energy coming down . . . in which particles were created and destroyed. I ‘saw’ the atoms of the elements and those of my body participating in this cosmic dance of energy. I felt its rhythm and ‘heard’ its sound and at that moment I knew that this was the Dance of Shiva.” 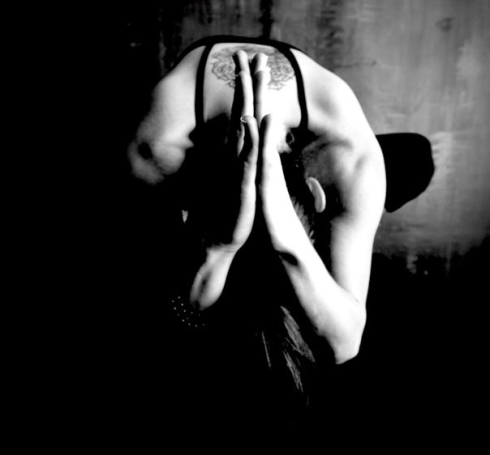 anjali = a gesture of reverence, benediction, salutation (from anj, “to honor, celebrate”)

mudra = seal (The gesture “seals” energy in the body and “seals” your relationship with the Divine.)

This being human is a guest house.
Every morning a new arrival.

A joy, a depression, a meanness,
some momentary awareness comes
as an unexpected visitor.

Welcome and entertain them all!
Even if they are a crowd of sorrows,
who violently sweep your house
empty of its furniture,
still, treat each guest honorably.
He may be clearing you out
for some new delight.

The dark thought, the shame, the malice.
meet them at the door laughing and invite them in.

Be grateful for whatever comes.
because each has been sent
as a guide from beyond.

Yoga classes often begin and end with the hands in Anjali Mudra (Salutation Seal, sometimes called Prayer Position), as a reminder that your practice is a form of prayer or offering to your true Self. By joining your hands together like this, you make a physical gesture of union—a symbolic reference of the union of your individual sense of self and the universal Self, in which you are aware of the interconnectedness of all living beings. As you hold the gesture and infuse it with the intention of union, you might notice a shift take place in your mind and your heart; you might clearly see how to act from that sense of connection.

Mudra (hand gesture) is a method of citta-bhavana, or cultivating a specific state of mind. There are dozens of mudras, and each represents a certain quality, such as compassion, courage, or wisdom. It is believed that, by practicing mudra, you awaken the seeds of these states within you.

Mudras can be found in the art and rituals of many sacred traditions, including Hinduism, Buddhism, and hatha yoga. Many of the best-known mudras represent the qualities of a bodhisattva, a yogic warrior who fights fearlessly to end the suffering of all beings. The origins of specific mudras are unknown, but it is believed that each gesture is the natural outer expression of an enlightened inner state. You can think of mudras as the sign language that springs from an open mind and an awakened heart.

Practicing mudra during asana, meditation, pPranayama, or kirtan (chanting) will help you quiet the background chatter of your mind. But the power of these seemingly simple hand gestures goes far beyond adding focus to your practice. Mudras can remind you of two important pieces of yogic wisdom. First, you are already whatever you seek to be. It’s easy to see courage and wisdom in the stories and images of Hindu deities or the Buddha. It’s much more difficult to see that those qualities reside in you. Mudras can remind you that these are not traits that you either have or don’t have. They are states that you consciously choose to feel and express. Second, mudra practice can help you find a way to translate good intentions into skillful actions. Mudras are the bridge between your inner spiritual experience and your outer interactions with the world. Actions speak louder than words, and mudras are like prayers translated into physical form.