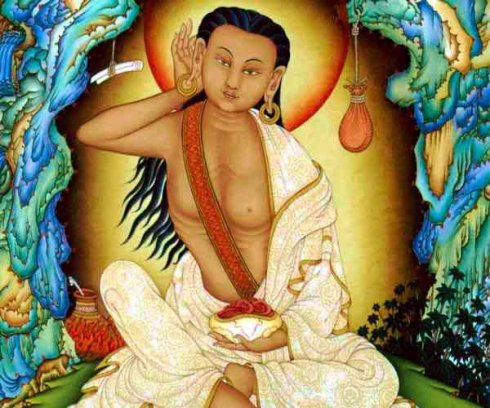 Nāda yoga (नादयोग) is an ancient Indian metaphysical system. It is both a philosophical system, a medicine, and a form of yoga. The system’s theoretical and practical aspects are based on the premise that the entire cosmos and all that exists in the cosmos, including human beings, consists of sound vibrations, called nāda. This concept holds that it is the sound energy in motion rather than of matter and particles which form the building blocks of the cosmos.

Nāda yoga is also a way to approach with reverence and respond to sound. Sound and music is in this context, something more than just the sensory properties and sources of sensuous pleasure, sound and music is considered also to play the role as a potential medium to achieve a deeper unity with both the outer and the inner cosmos.

Nāda yoga’s use of sound vibrations and resonances are also used to pursue palliative effects on various problematic psychological and spiritual conditions. It is also employed to raise the level of awareness of the postulated energy centers called chakra.

Music has been used by most Indian saints, prophets as an important and powerful tool in the quest for the achievement of nirvana; notable name to be mentioned here include Thyagaraja, Kabir, Meerabai, Namdeo, Purandaradasa and Tukaram.

The anahata concept refers to one’s own personal sound vibrations, which is thought to be so closely associated with one’s self and the self that a person can not share their anahata with another human being. In other words, this inner sound is sacred and once reached will open the practitioner’s chakras, which ultimately will unite the body to the divine/cosmos.

With continued sounds, a focused mind and controlled breath, the individual can, according to Nāda yoga, “listen in on” their own anahata, their own “inner sound”, which can take up to nine different forms. Such a process of inner awareness and sensitivity leads to increased self-recollectedness and finally to awakening.

To concentrate on this inner sound as a support for meditation is very helpful to tame the mind, and when it has been clearly recognized, used for self-recollectedness in outer life as well. Eventually, it can be experienced as penetrating all matter and indeed vibrates eternally throughout the Creation.

In Nāda yoga, one of the main breathing sounds is ahaṃ, where each part of the word (a ha ṃ) is focused on and spoken individually. The echoes produced by each of these spoken letters is a time where the yogi should immerse himself and rest. Now, because of imbalances within the human body, Nāda yoga begins by removing the ailments and impurities by “awakening the fire in the body (jāṭhara)” (Timalsina 212) with the use of a sound resembling that of a bee. It is important to note that when the yogin is forming sounds, his/her mind should not wander off to other entities.

One group to incorporate yoga, Nāda yoga specifically, and the practice of sound into the spiritual transformation is the Josmanĩ. The Josmanĩ are identified as a Sant tradition, and they are a blend of Śrī Vaiṣṇava Bhakti tradition with the Nāth Yoga tradition. Yoga is used in “personal and social transformation” (Timalsina 202). The Josmani’s spiritual quest interlinks the practice of Kuṇḍali and Nāda Yoga.

In the West, detailed indications and advices have been given by Edward Salim Michael in his book : the Law of attention, Nada Yoga and the way of inner vigilance. Ajahn Sumedho, from the Thai Forest Tradition teaches also the practice of this inner sound.